August 29th marked what would have been the 60th birthday of the King of Pop, Michael Jackson and the Internet paid tribute to him accordingly. Social media was flooded with dedications of all kinds, ranging from DJ sets, dance choreography, visual art and reposts of some of his greatest moments. Those who knew the late singer also joined in, with younger sister Janet going as far as posting a high production re-enactment of the ‘Remember the Time’ video from 1991’s Dangerous. To pay our own respects, we’ve gone through and compiled the best of these tributes below, enjoy.

Janet’s one minute and eleven second clip sees the singer, who is promoting her own new single ‘Made For Now’, which can be heard in the post’s second half, playing the part originally portrayed by supermodel Iman as she auditions dancers. It’s unclear whether this is part of a longer forthcoming music video or simply a nod to her brother on his birthday, but it is definitely the most high budget contribution to this list in terms of visuals.

The rest of the family were also out and about, with Jermaine Jackson attending the premiere of a MJ musical titled ‘Beat It – Die Show uber den King of Pop’ in Berlin, while Michael’s children, Paris and Prince accepted the Elizabeth Taylor AIDS Foundation Legacy Award on behalf of their father at an event in Las Vegas. Brothers Tito and Jackie were also in attendance and producer/musician Mark Ronson DJ’d the event.

Ronson also released a five minute remix track titled ‘Diamonds Are Invincible’ that weaves together some of Jackson’s biggest hits, including ‘Wanna Be Startin’ Something’, ‘Billie Jean’, ‘Smooth Criminal’, ‘The Way You Make Me Feel’ and ‘Human Nature’. “I can’t wait for you to all hear the extended version coming soon,” he said in an accompanying statement.

Artists all over the world paid visual tribute, such as this quite cool one by US painter Adrienne Muse

Musical tributes flowed in, including a plethora of bad acoustic covers as well as downright funky reworkings, such as this MIDI controller assisted take on ‘Thriller’ from Spanish producer Juacko. Not bad, not bad at all.

And of course there were a multitude of tributes paid to MJ’s liquid footwork, one of the best being from a breakdancing crew on the streets of New York.

Celebrities were not to be left out, with Sylvester Stallone, Smokey Robinson, Steve Harvey, and Questlove tipping their caps to Jackson online.

Happy Birthday to Michael Jackson, the King of Pop 👑 pic.twitter.com/xXM3RRYg5R

These 6 (sick) seconds tell you all you need to know about Michael Joeseph Jackson, born 60 years ago in Gary Indiana. 1) the expeditious manner in which he has mere milliseconds to adjust the mic stand a) before #KeepOnDancin begins b) giving him ample time to outrobot his brothers is one thing. 2) the seriousness and earnest attempt to ensure that mic stand is secure for when its time for him to return to it later (like 16 secs because he is the lead singer of the group) shows you he thinks ahead (a mortal like me woulda just let the ego work with it and been like “dog, Marlon ain’t about to embarrass me out this piece getting a head start on a dance move I kill 99% of the time” one false move and now my shoulder could hit the mic stand to the floor and now we gotta start the song again and Joeseph ain’t goin for that) but it’s step THREE that is mind blowi—-TOO LATE IM ALREADY IN ROBOT MODE DUMB CAMERA GUY YOU MISSED ME. I’m so fast you didn’t even put this factoid in its own category 3)—-wait what happened? what I miss? EXACTLY! #HappyBirthdayMJ #MJ60

While most posts were in the spirit of celebration, the Reverend Al Sharpton posted a sobering clip of his own speech at Jackson’s funeral in July, 2009. During the clip Sharpton addresses the singer’s children in particular, telling them “Wasn’t nothing strange about your daddy, it was strange what he had to deal with.”

“I want his 3 children to know, wasn’t nothing strange about your daddy, it was strange what your daddy had to deal with…”- speaking at the funeral of #MichaelJackson in July of 2009. Today on what would’ve been his 60th birthday, we honor his life and continue to say thank you pic.twitter.com/bvwSfVIUu0

MJ impersonator Paul Price Jr. posted this rather odd tribute vid that features his ‘Thriller’ moves backed by some dancers and a live violinist. The short clip for some reason features adult actress Tana Lea who disappears promptly after a second MJ impersonator cops a feel *confused shrug emoji*.

Some of these are just ah…we’re not sure what’s going on here tbh.

Tributes were paid outside of the digital realm as well, with the Cirque du Soleil for the sixth annual ONE celebration in Mandelay Bay Resort and Casino in Las Vegas, which was said to feature ‘acrobatics, dance and visuals that reflects the dynamic showmanship of the King of Pop’, while noting that members of the Jackson family would be in attendance alongside ‘other celebrities and VIPs’.

In London, the city where Jackson’s This Is It series of comeback concerts were scheduled to take place before his death, a giant crown was erected on the banks of the Thames. Fans took advantage of the temporary installation to pose, moonwalk and reflect on Jackson’s life with a backdrop of the city’s skyline. 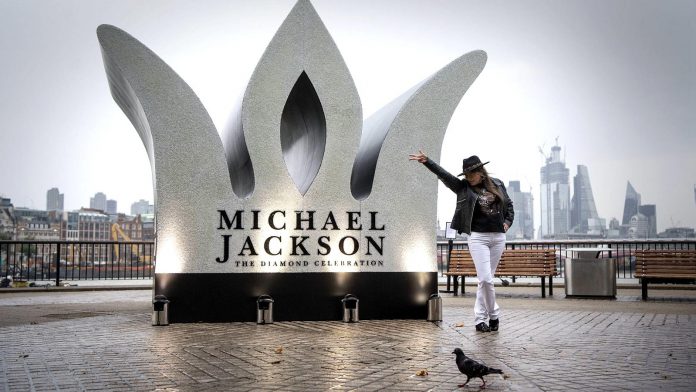 IMAX used the anniversary to announce that, together with the Jackson Estate, they will be showing the entire Thriller film in 3D for the first time in its cinemas across the US and Canada for one week, beginning from September 21. The film was remastered from its original 35mm negatives under the supervision of director John Landis and converted specifically for the cinemas giant screens.