Here at Words by Watts we spend a lot of time thinking, talking and writing about gear, by default always looking towards the new and exciting. It’s pretty difficult to say when this fascination with music making machines began, but we do know that humans have been toying with equipment for a long, long time. It’s probably safe to say that the voice was the first musical instrument, and following that scientists have found stones from approximately 165,000 years ago that may have been used as percussive instruments. However, the oldest constructed musical instrument to have been discovered thus far is the flute.

The Divje Babe flute is regarded by some as the world’s oldest, though it’s a point of contention amongst archeologists. Discovered near Cerkno, Slovenia, many have pointed out that the four holes in the 67,000 year old piece of bear bone is just as likely to have been caused by a carnivore’s teeth rather than a Neanderthal’s musical ingenuity. However, musicologist Bob Fink has argued that the four holes match four notes of a diatonic scale, and to prove this point the Slovenian National Museum created a clay replica of the bone, which was then played using whole and half tones of the diatonic scale.

The oldest known instruments to be created by modern homo sapiens were discovered in 2012 in a cave in southern Germany, with scientists using carbon dating to show that the flutes were between 42-43,000 thousand years old. Made from mammoth tusks and bird bones, the flutes have three finger holes and are thought to have been capable of playing relatively complex melodies.

Since that time variations of the flute have turned up all over the world, seven different 9,000 year old Gudi, which translates to ‘bone flute’, were discovered in a tomb in the central Chinese province of Henan in 1999. Made out of the wing bone of cranes, they featured five to eight holes and were determined to have been tuned for musical purposes. To test this theory, the best preserved example, which was nine inches long with seven holes, was played and recorded for posterity.

“Nine millennia after lips last touched it, the flute was played again and its tones analysed,” wrote Henry Fountain in The New York Times in 1999. “The seven holes produced a rough scale covering a modern octave, beginning close to the second A above middle C. There is evidence that the flute was tuned: a small hole drilled next to the seventh hole had the effect of raising that hole’s tone from roughly G-sharp to A, completing the octave.”

The Chinese chi is thought to be one of the first examples of a transverse, or side-blown, flute, which would have been held horizontally, as opposed to the previous examples that were blown at the open upper end like a recorder. The eldest discovered chi dates from 433 BC and is made from a lacquered bamboo with closed ends and five holes that appear on its side rather than top. 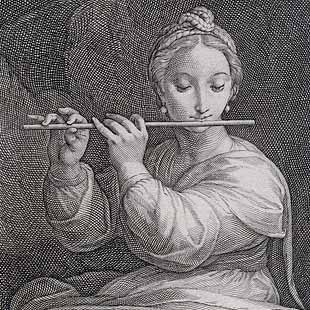 Flutes then began to develop all over the world in various varieties, such as the Middle Eastern ney, it’s name being derived from the Farsi words ‘nay’ and ‘na’, which mean ‘reed’. Variations of the nay can be found throughout the region and it is known to have been used for at least 5,000 years. The Persian nay has six holes including one on the back, while the Arabic and Turkish ones have seven, all spaced at semitone intervals.

The ney is also similar to the Chinese dizi, a transverse flute made of bamboo, that has been dated to the 5th century BC and has been used in Chinese folk music, opera and orchestral music. The dizi is remarkable for its use of a resonance membrane made from a very thin reed shaving, which is mounted on one of the holes. Called a di mo, it vibrates inside the flute and adds a distinctive bright sound.

Until recently the dizi was made of a single piece of bamboo, which meant that it’s tuning could not be altered, but a radical redesign in the 1920s by Zheng Jinwen saw it changed to two pieces of bamboo connected by a copper joint. This allowed the length of the instrument to be slightly changed, allowing the player to adjust its fundamental pitch. Soon, further developments occurred to meet changing demands in musical styles, with the finger holes being moved to allow for playing in equal temperament, as well as a chromatic 11-hole version.

The flute remained highly popular throughout European history, appearing in two Etruscan reliefs dated from the second and third centuries BC. A version of the modern concert flute first appeared in France in 1670 when the Jean Hotteterre family, as employed by the royal court, adjusted the existing model. The flute then became a three-piece construction rather than one, made up of a head joint, body and foot joint. The tone holes became smaller and the addition of new key meant that an E flat could be played, and consequently the instrument could now play all of the chromatic notes by using cross-fingering. This made it harder to play however, and by 1760 new keys had been added to avoid this problem, with the addition of G-sharp, B-flat and F, and by 1780 the flute now had eight keys.

The flute underwent several further alterations in construction, the most important arriving in 1847 when German flutist Theobald Boehm produced a model with a cylindrical body, a foot and a head joint, larger tone holes than previously, and padded cups on each hole. This design remains relatively unchanged to this day.