Dressed in a long skirt, shirt and tie, huge black-rimmed glasses and a new short haircut, Jean Grae looked like she sounds – quirky, sassy and cool. Aided by her affable onstage sidekick and DJ, Mr. Len, and a female backup singer, Grae launched into her set at The Espy’s front bar with “Casebaskets”, fromf her forthcoming album, Cake or Death.

New songs dominated the majority of the New York MC’s set, but she also dipped into older material and took the time to tell a few jokes and stories. Some of the set seemed a little slow in tempo for the kind of show it was, including a mid-set slow-jam song where Grae demonstrated her impressive singing voice. However, the momentum picked up towards the end, and for the last song she brought out Pharoahe Monch to perform a song from Cake or Death, entitled “Killing Em”, which then segued into Monch’s own set as Grae left the stage.

Replete in a shirt and vest over baggy jeans and sneakers, Monch immediately turned the energy levels up, launching into a barrage of tunes from his entire back catalogue. Monch is the sort of artist that commands the audience’s attention, bouncing around the small stage and quickly working himself and the audience into a heavy sweat.

Highlights were “Push”, “Desire” and the three-part mini-opera “Trilogy”, from 2007’s Desire, “Fuck You” from 2001’s Training Day Soundtrack, “Clap” from last year’s W.A.R., and his signature, and closing, song, “Simon Says”, from 1999’s Internal Affairs. That track got the crowd jumping, throwing their hands in the air and rubbing their chests before Monch asked for everyone to throw their ‘W’s’ up in the air, meaning the main act was about to come on. 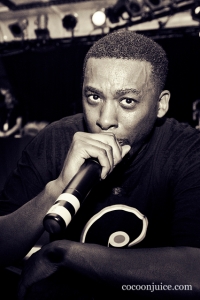 Often in the shadows of the more lauded members of his group, GZA’s humble persona comes across in his thoughtful and deliberate lyrics, earning him the early moniker of The Genius. Dressed simply in jeans and a t-shirt, the Brooklyn native born as Gary Grice was obviously appreciative of the audience’s reaction as he took the stage and was determined to do a good job.

Although it was advertised as being ‘Liquid Swords in its entirety’, this was not a scenario where said album was performed start to finish, rather, the songs from GZA’s landmark second album were arranged in a less predictable order, and peppered with hits from the Wu-Tang Clan back catalogue.

Quite rightly regarded as one of the key releases from a member of the Clan, Liquid Swords was when RZA struck a balance between the rugged beats of their debut, Enter the Wu-Tang (36 Chambers), and a smoother, soulful production that suited GZA’s voice and wordy rhymes. It was an artistic and commercial high water mark that GZA has so far not been able beat, although he has stated that a sequel with production again by RZA is planned for 2012.

Last time the fourty-five year old MC was in Melbourne was in August, touring with Wu-Tang. During that show at Festival Hall, GZA allowed the more flamboyant members of the group, such as Ghostface Killah and Raekwon, to dominate the spotlight, content to play his part as one cog in the machine. This show was a different story, however, and GZA made sure that the crowd was with him every step of the way.

Set highlights such as “Liquid Swords” (the entire Espy front bar doing RZA’s back-up vocals “when the emcees CAME to live out the NAME”), “Wu-Tang Clan Ain’t Nuthin’ to Fuck Wit”, “Clan in Da Front” and “4th Chamber” came thick and fast. Although it was difficult to see anything from most positions in the crowded, ill-equipped room, and the sound quality depended on where you stood, there was no doubting the amount of respect the audience had for the man onstage, who worked the crowd with skill and gave every song the energy it deserved.

As was the case with all of the first solo albums by the Wu-Tang Clan, the various members of the group featured heavily on Liquid Swords, but despite their absence, GZA managed to hold his own, either skipping their verses or doing them himself, such as Method Man’s part in “Shadowboxin’”, or Ol Dirty Bastard’s in “Dual of the Iron Mic” and “C.R.E.A.M.”. However, when this was the case he sounded noticeably less inspired than when it got to his own part, as obviously those raps were written to another vocalist’s flow.

Towards the end of the set GZA took a quick break as Pharoahe Monch reemerged to perform a solo a cappella, and then came back out and finished the remaining few songs.

GZA then didn’t leave the stage for a long time, although he was obviously exhausted and drenched in sweat, he took the time to shake hand and sign things for everybody in the front, before walking into the crowd and posing for photos.

Originally published on The AU Review on 07/01/2012. View original article.

Photos by for Viktor Wolf for FasterLouder. View photo gallery.